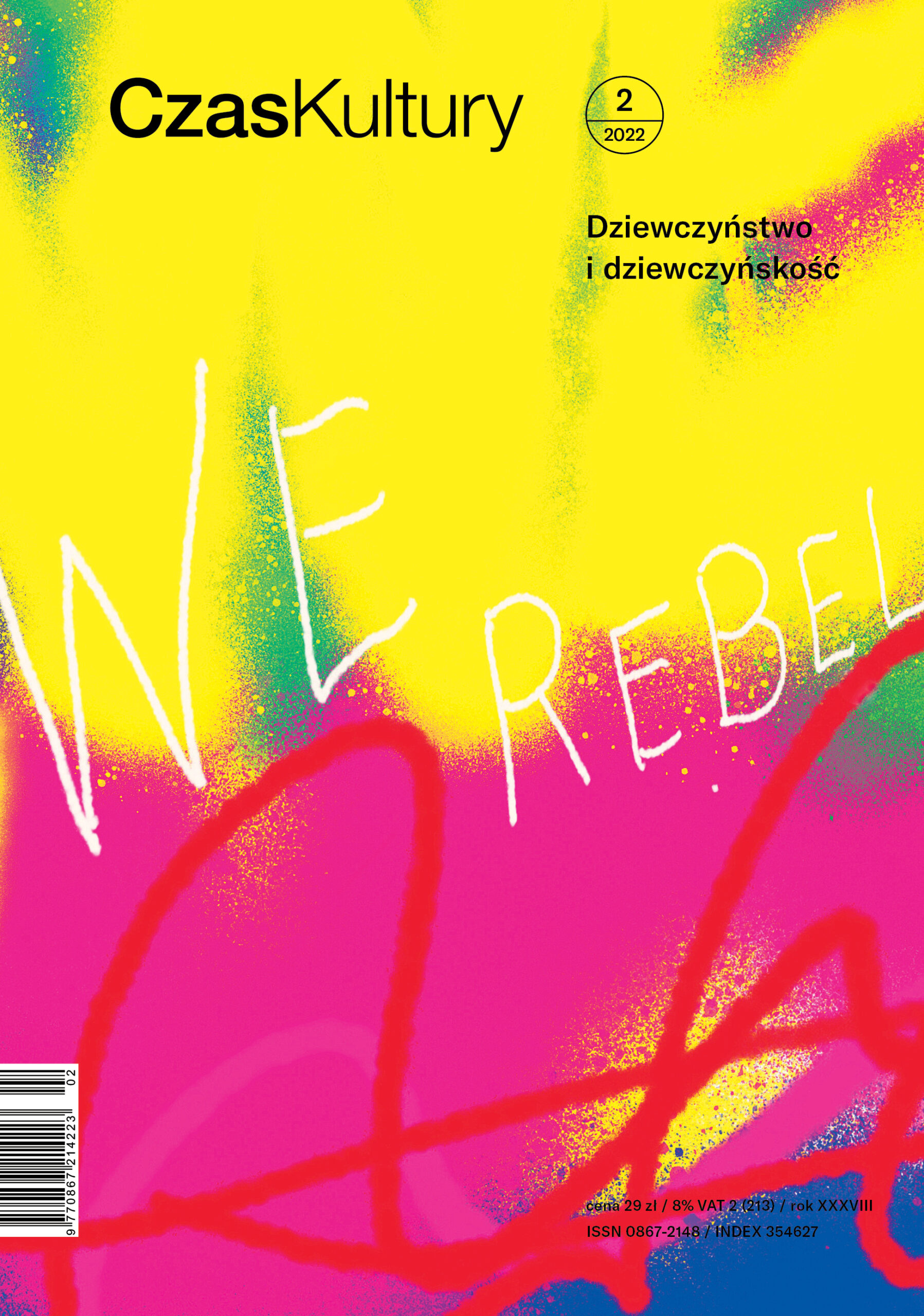 Abstract: This article attempts to interpret the protagonists of the iconic works of the 1990s: the Polish novel Panna Nikt [Miss Nobody] and the American series Twin Peaks, the film Fire, Walk with Me, and the book The Secret Diary of Laura Palmer through the prism of the category of girlhood, viewed as a particular existential experience of oscillation between childhood and female adulthood, a period of initiation. Using feminist and gender critique, the heroines' girlhood is analyzed in the context of their identity and position in the network of social hierarchies and symbolic structures in which they function. Keywords: girlhood, Twin Peaks, Panna Nikt, initiation

Abstract: This article is an invitation to think about three girl characters from young adult literature as figures of girlhood. The juxtaposition of three very different heroines makes it possible, on the one hand, to reflect on the benefits of such an arrangement, and, on the other hand, it shows the great variety of possibilities that the very concept of “girlhood” entails. The exchange of talents and competencies makes it possible to strengthen and, at the same time, diversify the titular category. Keywords: girlhood, figure, the drama of successful child, invisible child, orphanage

Abstract: This article contains a comparative analysis of the heroines of three classic novels for children: Alice from Alice in Wonderland, Maimie from Peter Pan in Kensington Gardens, and Pippi from the trilogy about Pippi Longstocking. Juxtaposing these works with the didactic literature, which was dominant at the time of their creation, the author emphasizes the axiological turn in the depiction of the motif of transgression. Inscribed in corporeality (Alice), in the model of behavior (Maimie), and even in the basis of constructing a literary figure of the child (Pippi), this motif no longer represents the sin of disobedience, but becomes a symbol of revitalizing change. Keywords: girl, transgression, body, J.L. Carroll, A. Lindgren, J.M. Barrie

Abstract: This article analyzes the figure of a girl in the Anglo-Saxon novel at the turn of the 20th century. The examples of Anne of Green Gables by L.M. Montgomery, Pollyanna by Eleanor H. Porter and The Little Princess by Frances Hodgson Burnett are used to describe the evolution of the literary model of an adolescent girl. The author points out how a new, more empowering model of girlhood emerged through children's (girls') literature, using the imagination as a possible weapon against the conservative social model. Keywords: adolescence, girl, gender, patriarchy, imagination, upbringing, education

Abstract: This article, based on the analysis of a series of letters about the unfair division of roles in the family sent to the editor of “Filipinka” in 1967 is part of the trend of girlhood studies and research on the social history of emotions. It shows how the process of distinguishing girls as a social group and the development of girl culture was accompanied by their gradual emotional emancipation. Letters to the editor, being a specific form of communication, are treated in the article as a kind of “emotional shelter” according to William Reddy’s terminology, allowing for the articulation of affects that go beyond the set of accepted emotional norms and may be signs of social change. Keywords: emotions, anger, girls, gender equality, Poland 1945-1989

Abstract: This paper aims at analyzing the functions of apocalyptic themes in children’s literature. The main subject of research is the book by Agnieszka Wolny-Hamkało Nikt nas nie upomni (2016), presented in the context of earlier examples of the same theme: a girl who rebels against the world, both in literature for adult readers (for example in the ballad Romantyczność by Adam Mickiewicz) and in books written for children. In almost all of the analyzed works the conflict of the girl and her “stepmother” (or other negative figure of the mother) is presented as the emotional background of the phantasmagoric apocalypse. In children's literature the archetype of a girl causing the end of the world is the title character of Alice’s Adventures in Wonderland by Lewis Carroll. In the further history of this literature a stable topic appears: “a child causing the end of the world”; in the present article this topos is called “a (very) minor apocalypse.” The works referring to such tradition depict the character of an angry girl who fantasizes about the end of the world, thus overcoming feelings of injustice resulting from a difficult existential situation. In the representations of the end of the world imagined by a child, the positive aspect of the apocalyptic tradition is present usually – the world is re-emerging, often in a more perfect form, acceptable to the child. Keywords: Agnieszka Wolny-Hamkało, apocalypse, phantasm, childhood, girl, emotions

Abstract: In the first part of this article, the author reflects on the depiction of girlhood in contemporary Polish literature addressed to teenage girls. She gives as an example of a non-stereotypical depiction of girlhood in literature Agnieszka Wolny-Hamkało’s trilogy consisting of the books Nikt nas nie upomni [Nobody will admonish us] (2014), Lato Adeli [Adela’s summer] (2019) and Po śladach [Following the tracks] (2021). In the next section, she interprets the second part of the trilogy as a subversive example of the description of girl sexuality and puberty, using the category of liminality, among others. Keywords: girlhood, sexuality, adolescence, liminality, Agnieszka Wolny-Hamkało

Abstract: The author argues that the heroine of Lewis Carroll’s Alice in Wonderland is a camp subject who moves around the world of camp phenomena. She draws attention to Alice’s monstrosity and the transformations of her body and the similarity with the protagonists of Ronald Firbank’s camp novels. She also points to the camp potential of girlhood, which is based on nonbinarity and the trying on of different identities and the testing of different social roles. The author also emphasizes the role of oscillation, which characterizes girlhood, and which camp researchers consider to be one of the essential elements of the definition of this category. Keywords: camp, camp subject, camp phenomena, bizarreness, monstrosity, fold

Abstract: Why did Pippi Longstocking, the fictional character created by the Swedish writer Astrid Lindgren, become one of the most popular icons of contemporary feminism? Examining the development of the riot grrrls music trend and the anarcho-punk aesthetic, the answer can be quickly found. A question arises about girlhood as a strategy and a subversive solution drawing on literary prototypes of the “odd child” who will not grow old. Keywords: feminist counterculture, music, literature, feminism, gender, girlhood, riot grrrl

Abstract: This article presents the formation of the Sad Girl phenomenon in Poland and its meanings acquired in the Polish context. It focuses on female activists’ attempts to enrich the visual language so that it is more attuned to everyday experience. It analyzes how subversive gestures enter pop culture, how they have become conventions and identity patterns, and how they have been appropriated and commercialized by the platforms on which they function. The article also captures cultural patterns regarding the expression of pain and the impact of gender stereotypes on the socialization of boys and girls. Keywords: social media, sadness, crying, Instagram, communication, Sad Girl

Abstract: The author analyzes the creation of two heroines of canonical texts of so-called novels for girls – Jo March from Little Women by Louisa May Alcott (1868) and Anne Shirley from Anne of Green Gables by Lucy Maud Montgomery (1908). She reads them as proto-girlhood predecessors of Pippi from Astrid Lindgren’s novels. She examines the way in which the heroines are socialized and how they negotiate their independence and otherness. For context, she uses the film and series adaptations – Little Women (2019, directed by Greta Gerwig) and Anne with an E (2017-2019, created by Moira Walley-Beckett). keywords: Anne of Green Gables, Little Women, Lucy Maud Montgomery, Louisa May Alcott, girlhood studies, girlhood, novel for girls, adaptations

Abstract: This article attempts to establish the definition and boundaries of an active teenage girl – a heroine of popular culture referring to the real world, who does her best to act for change. Based on Campbell’s monomyth and its feminist reinterpretation, the text finds familiar yet innovative narrative solutions that situate the female protagonist in dystopian unreality. The author also briefly refers to contemporary Disney princess archetypes and juxtaposes them with the heroine of one of the most popular dystopian series for young adults. Keywords: popular culture, teenage girls, teen film, young adults, dystopia, activism, Katniss Everdeen, Disney

Abstract: The author discusses the relationship between the concepts of girlhood and witchcraft, and analyzes the similarities between the figures of the girl and the witch, trying to place them in the context of contemporary feminist thought and girlhood studies. Her research material is The Craft, directed by Andrew Fleming. keywords: witch, girl, feminism, girlhood studies, witchcraft

Abstract: The French writer Annie Ernaux openly admits that her literature is committed. She does not mean, however, the Sartrean model of literature committed on the side of a particular political ideology, but the struggle to bring those who traditionally remain invisible into the field of vision of literature, as well as the society. Thus, she creates a genre hybrid: an auto-sociobiographical narrative. She uses it to trace the social framework that shapes the identity of individuals and social groups that interest her. In many of her texts, as in the discussed novel Mémoire de fille, it is class and gender shame, or in fact, the memory of shame, that most strongly influences the formation of the subject, in this case, a young girl, inhibiting her development, or on the contrary, enhancing it. Keywords: Annie Ernaux, committed literature, women's writing, shame

Abstract: The article is a review of the book Erased Pleasure. Clitoris and Thinking by Catherine Malabou. Its main topic is ‘the feminine,’ a category introduced by French second-wave feminism and still useful for feminist theory. Keywords: Catherine Malabou, clitoris, the feminine

Abstract: Catherine Malabou’s latest book is an intermediary in the French philosopher’s work on anarchy and anarchism. The author considers the reasons for erasing the pleasure of thinking, which is closely related to the clitoris. She finds two main reasons: the continued phallocentricity of philosophy and the currently popular anti-essentialist transgender and postgender theories. In the orders of these two discourses, both the anarchist clitoris and the rebellion of the feminine element of reflection are negated. Malabou emphasizes the importance of the legacy of radical second-wave feminism, and in creating a vivid and conceptual portrait of the clitoris, she does not forget the importance of biology or that the clitoris does not allow itself to be ruled. In her reflections, what is feminine acquires the dimension of total anarchy, which she defines as an order without domination and governmentality. Keywords: anarchy, clitoris, radical feminism, phallogocentrism, transgender