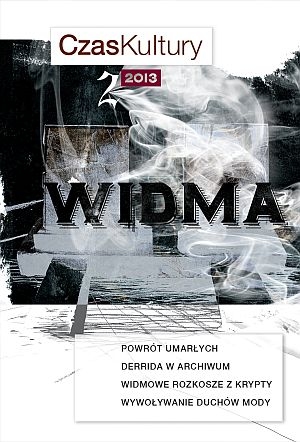 This spectral issue of „Czas Kultury” shows that we are living in a time of continuation in which separation has become impossible – nothing today passes irrevocably, while the idea of a final death, ending, or separation has been laid to rest. Everything that leaves is doomed to return to live a strange, undead, spectral life. Is the present permeated by a weak, trace presence of the past, which continually undermines and stratifies our current activities and projects?

Abstract: The article seeks to identify the characteristics of a current in theoretical thought referred to as spectral criticism. I am especially interested in the transformation by researchers within this trend of the Derridian concept of the ghost from the Spectre de Marx (1993) in relation to the categories of the literary text, interpretation, and questions of literary influence. Using as a reference the positions of David Punter, Maurice Blanchot and Jacques Derrida, the article points to the consequences for the perception and interpretation of a text of using the concepts of secrets, haunting, and the presence of the dead.

Abstract: The article attempts to read and ustilize the category of “crypt” from Jacques Derrida’s Fors to develop a different way of thinking about the literary text and reading strategies towards it. The author wonders how notions such as “spectre”, “crypt”, and “haunting” affect the perception of the condition of each reader, and what kind of reading pleasure they invite. Derrida’s vocabulary is supplemented here by the critical categories of Maurice Blanchot (e.g., his thinking about language – death), which allows us to look at the act of reading as a strategy for necrophiliac pleasure, which may offer another way of thinking about the experience of reading and writing, understood as confrontations with a spectral presence.

Abstract: The article is devoted to the history of sound reproduction devices and nineteenth-century speculation about the presence of ghosts in electrical equipment. It analyzes the relationship between sound and space in the home in the light of the concept of hauntology described by Jacques Derrida in Spectres de Marx and reinterpreted by Simon Reynolds. The proposed metaphor of the poltergeist grows out of the modern concept of fidelity in the listening experience, which is reflected in the production of music and in sound operations such as the remastering and compressing of audio tracks, and of the notions of cleaning up and “crystallization” in sound recordings.

Abstract: Hauntology is a trend in music, and more broadly in culture, defined by Mark Fisher, Simon Reynolds and Adam Harper. It is linked with who are artists interested in exploring memory and its close connections with the transmission of media (hence its frequent references to radio and television). This paper is an attempt to summarize the phenomenon in the form of an alphabetic breakdown, taking into account both the main inspirations behind the movement and profiles of the artists in it.

Abstract: In this article, the author tries to show an alternative to the Marxist concept of the spectre, a psychoanalytic critical theory based on the category of the “genetic spectre.” He focuses on the early texts of the author of Politics of Friendship to address the concept of the spectre, as well as other, key categories in Derrida’s projects: writing, day-dreams and memory. The analysis is based on the assumption that – according to Derrida – Freud builds a “stage” for dreaming, on which the theatricality of inscriptions and a departure from the principle of metaphor in favour of the rule of metonymy is played out. However, in Derrida’s later texts (Mal d'archive), the author sees a generalized psychoanalytic criticism of sources and of the inability to experience unmediated memory.

Abstract: Our memory and perception are distorted by the influence of the wide variety of media and technology that fill our daily experience of reality. The effects applied to sound and images are not only an artistic treatment or new aesthetic that filters into audio-visual art and performative practices; they also bring us closer to specific memories of media usage. The navigating of “traces” and “reflections” resembles moving across a map or through memories. Repetition constructs memory, but its also provides a certain form of pleasure, and often becomes an important narrative element of new media practices, as well as of our individual experiences of technology.

Abstract: The text looks at the fall of communism in Europe in terms of the major influence these events exerted on the transgression of a conceptual system, which left the region helpless in the face of a semantic redefinition, and deprived it during its political transition of an important tool that could have helped it deal with the essence of this transformation – Marxism. The text analyzes various artistic interventions related to the aftermath of Communism in post-communist Europe: the Russian group ETI, the Romanian artists Daniel Knorr and Anca Benery, and the Hungarian artists Tamás Kaszás, Tamás Szentjóby, Yael Bartana and Santiago Serra all work to restore lost analytical categories. Interventions – considered in Derridian terms – undertaken in order to alleviate the phantom pain of capitalist cities.

Abstract: In the era of post-memory, the Holocaust as an event belongs more to the dead than the living. In Polish literature, we find evidence of its haunting: this is not merely the return of socially repressed issues concerning the Holocaust. The dead themselves are also returning, after having been forced beyond the bounds of memory during the postwar years. They will not allow the next generation to forget. Their relationship with the annihilation of the Jewish world, with the dead, has been emphasized by writers who survived the war as children. Today those who were born after the war are writing about their persistent contact with spirits and ghosts of the past.

Abstract: The article proposes looking at the process of emergence as a spectre. This is considered from a dual perspective: as something that offers hope for the self-organization of society, and as a sinister force that humanity tries to master and control. The first means of understanding emergence is strongly present in new social movements that paradoxically share a belief in self-organization but do not appreciate the forms it takes, which is implemented without their mediation. The second way of understanding emergence lies, in turn, at the heart of social studies and the practice of mathematically modelling the complexity of social life, the goal of which is to create technical tools for controlling self-organization. The realization of these aims eliminates contingency from social life, leading to attempts to rationalize social emergence, which merely reveals how much as a species we depend on the world that we are creating.

Abstract: The article analyzes different ways of describing the phenomenon of fashion in terms of temporality. The starting point is a study of Alfred Kroeber, who at the beginning of the twentieth century tried to discover the general laws governing changes in fashion as a constitutive element of all cultural phenomena. In addition to trying to understand the repeated returning of the past, the article also addresses contemporary practices related to anticipating trends. By asking questions about the relevance of this phenomenon, the author shows how knowledge of the future is first constructed and then utilized.