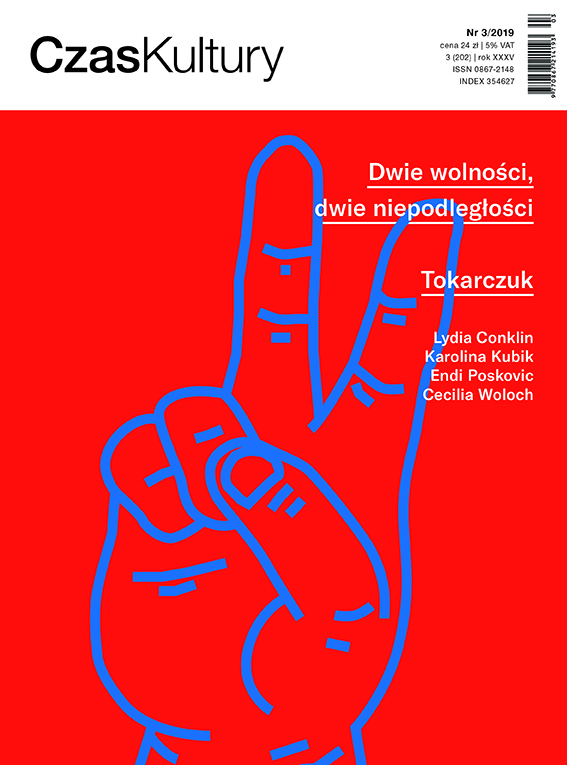 is a section whose common denominator are these anniversaries. American and Polish authors alike enthusiastically agreed to take a comparative look at the issue of freedom and independence on both sides of the ocean. On the one hand, the model of freedom practiced in the United States has become paradigmatic for a number of discourses, and as a benchmark, it must be continuously reexamined. On the other, we are experiencing a revival of liberation movements in Poland in all shades and colors across the (broadly understood) political scene, and it is hard to ignore these changes. Critical and research texts, as well as essays based on experiences and case studies, are supplemented here with artistic explorations.

is currently the most well-known Polish writer. She has received the Nike prize twice, one of the most prestigious literary awards in Poland. The winner of the International Booker Prize in 2018, she was again nominated for it a year later. She is an ambassador for literature written after 1989 both in Poland and the world over.

Abstract: I propose to use Isaiah Berlin’s well-known concepts of negative and positive freedom to understand the path of Poland’s state building project since 1989. I argue that the choices made reflect the inherent tension between full realization of one or the other kind of freedom. (I. Berlin, Two Concepts of Liberty, 1969) In Benedict Anderson’s terms, Poland’s is a case of a state-seeking nation rather than the more frequently studied instance of self-conscious nation building spearheaded by multiethnic or multi-confessional states (for example the United States in its formative history). Although it is natural to draw lessons from Poland’s interwar independence, the contemporary period of state building occurs in a radically different ‘hegemonic’ normative framework that that of 1918-1939; one where the concept of sovereignty (central to Berlin’s ‘positive freedom’) is conditioned by transnational cooperative undertaking and the ‘West’ as a value-laden concept. The defining particularity of the Polish case has been the internationalisation of its contemporary state-building project. This puts the traditional understanding of sovereignty at variance with the claims of individual autonomy and value pluralism.

Abstract: The United States of America has experienced serious crises in recognizing the freedom of its citizens. One can point to at least three critical areas. Firstly, some people whose ethnical origin was other than North American were treated as an exotic species and displayed in the so-called human zoos. The other areas involve the legality of slavery and racial segregation, and the exploitative treatment of the indigenous people, American Indians. Despite these major crises related to freedom, the United States of America enjoys a reputation as a country with democratic civil liberties whose extent remains a challenge to foreign observers.

Abstract: In 2019 Poland will celebrate the centennial anniversary of the establishment of Polish-U.S. diplomatic relations and the 30th anniversary of freedom from communist rule, making this an opportune time to compare Polish and American views of freedom, liberty, and democracy. Using data from the World Values Survey, waves 2 through 6 (1989-2014), this paper examines diversity in public opinion on a range of freedom issues, including democracy, women’s rights, immigrants’ rights, civil liberties, freedom of speech and of religion, and human rights, with a particular focus on gender diversity. Findings show considerable variation between U.S. men and women – but not Polish men and women – on freedom-related attitudes and beliefs. Cross-country comparisons show that, with some exceptions, U.S. men and women tend to express more liberal ideas, though Poles’ views are becoming more progressive over time. We conclude that a gender perspective is essential to a full understanding of comparative attitudes toward democracy, liberty, and freedom.

Abstract: Poland disappeared from the political map of Europe in the eighteenth century, and after 123 years of foreign domination, the country regained its independence in 1918. This article will look at the migrations from all three partitions and their impact on the United States with an emphasis on the city of Chicago. Chicago quickly emerged as the capital of the diaspora and played a crucial part in the struggle to regain independence in the 20th century. In 1939, the Polish Republic was once again under attack and the Chicago Polonia lead the response of the diaspora to yet another partition, as Nazi Germany and the U.S.S.R. divided the Second Republic. Finally, during the long Cold War, Poland fell under Soviet domination and again Chicago’s Polonia reacted and played a role in the nation’s continuing struggle for freedom. The article outlines Chicago’s response to these events and discuss the role of peasant emancipation and immigration in the long struggle for a free and independent Polish Republic.

Abstract: I am here to explain, or rather highlight, a few moments from my Fulbright experience, so please allow me to paint that landscape in the spirit of the alternative production of knowledge because I truly identify with a re-imagined and decolonized future.

Abstract: This article discusses three interconnected threads related to the notion of ‘freedom.’ The first focuses on the personal experiences of the author, who left for the United States in 1990, when the country was considered an ideal of freedom. The second investigates the cultural conditioning of how freedom is understood in Poland and the USA, and the cognitive hypothesis indicating a universal way of experiencing freedom. The third talks about the state of freedom in the contemporary “free” world, where border walls are multiplying, and the social attitudes of Americans and Poles have been colored by a siege mentality and xenophobic populism.

Abstract: This article explores the idea of jazz as a symbol of freedom, both in the United States and in Poland. In examining the historical and cultural contexts of both countries when jazz first appeared and gained prominence, the function of jazz as a proponent of the ideology of freedom becomes clear. Through musical analysis, the development of both American and Polish jazz is broken down into devices and related to specific emotions and values that these musical elements suggest. It is through the introduction, growth, and development of the jazz idiom in each nation that it has become an essential musical genre within each culture and continues to stand for and symbolize freedom today.

Abstract: This text discusses the pedagogical and artistic experiences of the author during his stay at Florida Atlantic University as part of the Fulbright Program. It is an attempt to compare dominating trends in the art education system in Poland and the USA. The reference point for the comparison are the achievements of Black Mountain College, which today remains an unparalleled model of education, not only in the field of art but also ideas of a university open to the challenges of democracy.

Abstract: Poskovic’s works have been exhibited worldwide in numerous important international biennials and triennial. He is the recipient of notable grants and fellowships from, among others: from the John Simon Guggenheim Memorial Foundation, the John D. Rockefeller Foundation, Bellagio Center Italy and the J. William Fulbright Commission Senior Research Fellowship to Poland. Poskovic’s works are represented in permanent public collections worldwide.

Abstract: The subject of this article is Olga Tokarczuk’s libretto to the opera Ahat-ilī. Siostra bogów (Ahat-ilī – Sister of Gods) by Aleksander Nowak, which premiered on 16 September 2018. Although the idea for the libretto was based on the novel Anna In w grobowcach świata (Anna In in the Tombs of the World), published in 2006 as part of the Canongate Myth Series, its structure and tone diverge from its original. The author of the article conducts a comparative analysis of the aforementioned texts and specifies the direction of the changes introduced by the writer. He concludes that the differentiating repetition of the mythical tale about a Sumerian goddess Inanna can be simultaneously viewed as a mirror in which the author of Flights took a look at herself years later, and as a lens focalizing key threads of her writing, including her evolving attitude towards metaphysics and spirituality.

Abstract: This article attempts to interpret the work of Olga Tokarczuk via the lens of nomadism, which is one of the defining features of contemporary times. Tokarczuk’s prose is an example of a distinctive transition from the chora to the topos in the sense of an inability to anchor the modern subject in any form of lasting roots. The nomadic stories of Tokarczuk are both a diagnosis of human homelessness as well an expression of helplessness; what can be done with this fluid, unmoored human condition and where to find any form of lasting identification with another person and a fixed place?

Abstract: This article is devoted to Olga Tokarczuk’s book, Bieguni (Flights), for which the writer was awarded the 2018 Man Booker International Prize. The point of departure is the category of an “experiment” used in reference to Flights in the English-speaking world (and absent in its Polish reception). The analysis reveals the contiguity between Tokarczuk’s diagnoses and the findings made by Catherine Malabou and Jacques Derrida in the book Voyager avec Jacques Derrida – La Contre-allée.

Abstract: This article’s attempt to apply postcolonial theses as a tool for rethinking Polish culture and history requires confrontation with the following engrained opinions: (1) Poland was not an imperialistic country, and having had no colonies is absolved from accounting for its shameful past, and (2) the non-colonial Poland is grouped with other colonized countries and nations (from the late 18th century until the year 1989). The analysis refers to the “structure of feeling” generated by the imperialistic Poland in the former borderlands as well as in relation to the peasant and Ukrainian populations after the Second World War. The ruling government’s treatment of natural forests as an economic resource that can be managed freely by the authorities is another strain of Polish cryptocolonialism.

Section: In the Workshop

Abstract: This article presents the main assumptions of the problem of the Anthropocene discussed in Bernard Stiegler’s book Neganthropocene. For Stiegler, the key reference point is the issue of technics and new technologies. According to the author, linking the technological evolution with the development of capitalism resulted in the human being gradually alienated by technics. It has also produced an awareness that has had increasingly toxic consequences both for the human as a subject, social relationships, and environmental issues. Due to its simultaneously disorganizing and exploitative nature, Stiegler proposes that the Anthropocene be called the Enthropocene. At the same time, the author offers his own project of overcoming the crisis, which is based on re-thinking the issue of technics. He calls for the reinforcement of human awareness and agency in relation to new technologies by replacing the economic perspective with newly-construed categories of “life” and “care.”